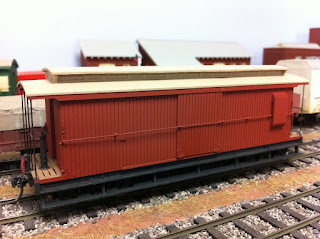 These guards vans date from the late 1890's and there were versions with platforms at one end or both ends.  Some lasted into the 1970's in departmental service so, even in the diesel era, it would not be out of place to have one parked on a siding or as part of a work train.  In the early years of the 20th century, these vans were the main type to be found on goods trains. 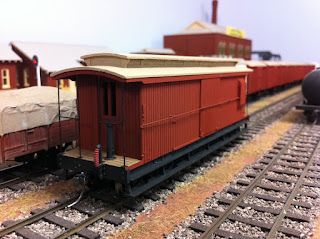 Quite a few were transferred to Commonwealth Railways during WWII as class NY and NYA.  New Zealand railways had some very similar vans (single ended) which have been previously available as brass models in  Sn3½ scale.  Correct bogies are available for the Sn3½ version from North Yard in New Zealand.

For more information on the prototypes, please see the WA Wagon Pages for Single Platform and Double Platform vans.  For information on the Commonwealth Railways vans see the Comrails web site.  There are also a few photos of the vans at Rail Heritage WA.  Tip: Search for "clerestory" with both the Title and Caption fields ticked.

Marbelup Models currently has both single-platform and double-platform versions available to order in  Sn3½ scale, and also in 4 mm scale.  The vans can potentially be produced for HOn3½ (or even HOn3) and O scale if their is demand.

The model consists of two 3D-printed parts, containing most details including running boards, brake stand(s), brake hoses and chimney.  The modeller must add some details, including handrails (on the ends and side), and truss rods.  The modeller must also obtain bogies and couplers.  Marbelup Models has ordered a small quantity of NorthYard bogies which will be available for sale.  For more information on the parts required and construction techniques, see the Assembly Tips.

As with many rail vehicles, there were variations between different batches of vans and modifications carried out during their long lifetime.  The model depicts the vans generally as they were later in their life, but is not necessarily 100% accurate for any particular van.  The clerestory windows have been opened out on the model, but some vans has "solid" windows.

Back to Marbelup Models Home Page
Posted by Richard at Friday, January 01, 2016